In our last post we already made the case how important automated testing is in a transformation business case. It is one of the biggest parts when it comes to monetary efficiency savings.

But it comes with some big challenges:

Especially because of the last point we showed in the last article why infrastructure automation is a prerequisite to have the most out of an automated testing transformation.

In this article we would like to continue this discussion and show in more detail how test automation works with Ansible and Selenium (1). In the second part of this story we’ll touch on another important piece:  how to test your automated testing infrastructure. We are going to show some examples around Molecule (2).

So, without further ado, let’s get started …

One of the biggest efforts in the application lifecycle is manual testing; Transforming to a primarily automated testing approach can unleash huge efficiency gains.

Another benefit of  automated testing is it’s much more reliable than manual testing and much easier to standardize.

But our Ansible Automation Platform offers a lot of the building blocks needed  for automated testing frameworks. But on the other side you want to test the automation scripts you are creating for that purpose. Which leaves you with two main tasks:

Let’s get away from the abstract world into a concrete use case:

The architecture  we want to focus on is quite simple. We have a client which performs all kinds of online tests. And we want to have the test infrastructure running in a scalable environment via a selenium hub.

Why the automation of the automated test infrastructure is so important is shown in the next diagram:

If you run a hybrid or multi-cloud approach you may have different infrastructures for the same application. Via containerization and OpenShift as the container platform we can already abstract from the different kinds of infrastructures. We also would have a repository to centrally store the relevant artefacts. Besides that we should not forget about test data. We need a central point to manage them as well.

But now comes the thing, maybe I am having my default development and my default CI running on Azure. And maybe I have excessive performance testing which runs on synthetic data and should go where the cheapest infrastructure is, maybe Alibaba. This example is not doable if the testing architecture isn’t coming with the baseline and is not automated. The manual effort would eat up all achieved efficiency gains. Besides that everything would get too complex and you quickly would lose control.

So, we have two parts:

PART I: Selenium support by Ansible shows how you can ramp up the test infrastructure via Ansible

PART II: How to test your automation scripts is shown in the second part via Molecule

Let’s see how we could achieve this setup through Ansible automation with a small example:

PART I – Selenium module for Ansible

After using ansible-galaxy to install the module, take the library/selenium file, and put it into the respective repository.

Include the following examples within in your playbook/roles:

Here are some code examples how you would start tests on your selenium hub. You may integrate these parts into your CI/CD pipeline via CLI.

To test the module manually, you can run:

To run all tests:

In the chapter about Selenium we covered the use of Ansible to spin up the needed instances to layout the required platform to execute Selenium tests.

We also have to ensure this infrastructure is kept in good shape and changes or updates to it will as well be tested in an automated way beforehand to not disturb the test automation execution on top of it.

This is now the point where Molecule joins the scene.

Extracted out of an article by Ilkka Tengvall (2)

What we want to achieve: Lightweight and easy testing

Let’s have a look at how you can add testing to Ansible roles.

Meet Molecule with Podman plugin and Ansible as test language:

Let’s go through the process

We use RHEL8 in the guide, along with RHEL8 UBI container images. RHEL is set up with required repos, see ansible playbook.

Please note that the molecule test we are going to do requires you to be the root user!

Create a new role by using Molecule to get the basic molecule files in place. This will run ansible-galaxy init role in background, and will add the initial molecule config and test files.

If you have an existing ansible role, and want to add molecule testing to that role, run:

If you are a bit lazy and just want to go on with testing molecule, git clone the below example role with added molecule testing:

Read the following chapters and play with it by modifying the settings and test cases.

Now let’s get going. Investigate how:

Test cases are trivial to write with ansible. In this case it just runs install and deactivate commands for the service in check-only mode, and verifies if it would have needed to apply changes. In our case a change would show a failure, as everything should be already set up. So it’s ok if nothing would have needed a change.

You don’t need to know about podman in this case. I’d only add image pruning to be done once in a while to the test machine, if it’s a permanent VM. You could be running these tests in Ansible Tower or a Jenkins machine, in which case you want to prune the images. Remember, no root required, so podman gives you a lot of options where to run it.

Here’s how it looks when the container is started step by step. Podman has pulled the image, and is running a test container. You can do only those parts by the following commands:

First and foremost, this is enough to run the tests:

In our case it has a happy ending:

There are other tools out there which help you to keep your infrastructure in shape. Definitely worth mentioning is KICS (6).

KICS is easy to install and run, easy to understand results, and easy to integrate into CI.

Definitely worth a look. 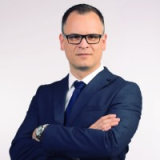 Associate Principal Solution Architect with Red Hat Switzerland office Zurich, responsible for the Pre-Sales business together with the top 13 Global System Integrators and technical SPOC for the big three hyperscalers.