Lately I have been giving a keynote at the Vogel-IT yearly Cloud Computing eXchange conference CCX on the history of clouds and the lessons we learned in looking at that history. The conference was held virtually this year on the Star Wars day, May 4th, 2022:

As the conference language was German, I want to talk about exactly these things here for a broader consumption.

So, let’s quickly look back into the first days of the three most important public cloud providers and their ideas:

We all know that EC2 was a by-product of Amazon’s online store, because they were thinking about how to monetize the unused compute resources needed for peak times during the whole year. So they started with something that now is known under the name of Infrastructure as a Service (IaaS), something that was easy to do, as virtualization in the form of virtual machines also started to become mainstream and hugely adopted.

Google, as a provider of search capabilities thought, that it should differentiate itself from Amazon’s EC2 offering, and created something that would nowadays be called a Platform as a Service (PaaS). They provided tools to build apps. They did not offer VM-like hosting capabilities.

Microsoft, as they often do, monitored the market, looked at what happened, and then built a combination of these two, making additional use of their well-established user and developer community and all the tools, including VM-hosting capabilities.

Today we see that Amazon still leads the pack, closely followed by Azure and Google being a bit behind in third place.

The first thing that comes to my mind: Never underestimate the power of a commodity. The world simply was not ready in those days for a PaaS offering, Google is still fighting (with its Cloud offering) the early inventors problem. Amazon did the right thing in slowly evolving from traditional on-premise thinking to cloud thinking. And again, as mentioned above, Microsoft is the laughing third, as so often in many of the things they did.

So, although NIST did introduce a cloud-taxonomy early on, the market was not fully ready for all its variations and success came from slow adoption and evolution.

So, now that we have looked back, let’s see what the present holds for us. After nearly two decades since the introduction of cloud computing we still can see many misconceptions as to what a cloud is, what a cloud strategy might be, which cloud to use, etc., etc.

I still come across CTOs and CIOs stating that their Cloud-Strategy is Office365. Or I meet sales people who have difficulties in understanding what providing a cloud and using a cloud means, and that those are in some cases 100% orthogonal things.

And I’m sure, we all also still meet the random person doing bullshit bingo and having no clue whatsoever about cloud and cloud readiness.

So, when we now talk about cloud with our customers, first we need to differentiate between using a cloud or offering/providing a cloud. Then (or even before that) we would need to define the users and the use cases for the cloud. Some customers also might not really need a cloud, but could simply benefit from hosting or even out-tasking.

Once these initial constraints have been solved, the real work starts. What do we need? Who could offer that? What does it cost (not all cloud offerings are the same, some do not charge for inter-region network traffic, some do, just as a small example)? Which people or skills do I need to perform all the migration or operation?

Even close to 20 years after the invention of cloud computing we still need to tackle the most basic things. We can not take for granted that the knowledge is there now. There still is room for the most basic training and information sessions. But one thing is for sure: Cloud is here to stay and it’s getting closer to every single one of us.

Having checked out the present, let’s look into the future.

As stated above, we can no longer avoid thinking about and planning with cloud resources and infrastructures. Predicting the future is really complex, so a task like predicting the next 20 years is deemed to fail. Therefore let’s look closer into the near future. What we see are trends like IoT (Internet of Things) or edge computing, the cloud is extending its reach into traditional data center areas. Offerings like AWS Outpost, AzureStack, and others bring and extend the cloud to your home (in this case: into your data center).

This in turn implies that we all need to solve the knowledge gap and help our customers to understand what cloud can mean for them.

One thing that we also see is that Google learned. Without their early attempt to build a PaaS, we would not have Kubernetes today. And Kubernetes is currently one of the most active and important OpenSourceSoftware development projects and has created the de-facto standard for PaaS. Even so that some pseudo-cartoonists seem to see that differently (that is NOT a real Dilbert, it’s been changed!):

My talk was between the morning sessions and the lunch break, so I tried to be entertaining and a bit thought provoking. If you like it, you can watch it below, it’s just 27 minutes.

As this conference was held in German, here’s the link, but remember, it’s in German: 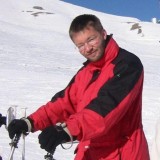 Started at Red Hat as THE solution architect for Cloud in the D-A-CH area on April 1st, 2013. Now I'm helping two Sales Specialists in positioning and selling our Automation Products Ansible Automation Platform and the Advanced Cluster Management for Kubernetes from a technical perspective to our german customers.